One month ago, husband and I really needed a break-out from our daily routine and a one-day trip was just perfect at the moment. My father also joined us and off we went to one of my favorite cities in Romania – Sibiu, which is absolutely amazing.

Romania is a wonderful country and I will always try to highlight this and share my pictures and stories to as many people as I can. Romania has great mountains – the Carpathians, the Black Sea and also the Danube Delta. So it’s kind of unique, right?

A lot of tourists hear about Transylvania and most of them believe it’s a different country than Romania, but hell no… Transylvania is just a region in Romania. An awesome one if you ask me… and Sibiu is a medieval town part of this area!

So basically, this is how our itinerary looked for that hot day in July: Bucharest -> Vidraru Lake -> Transfăgărășan Road -> Bâlea Lake -> Clay Castle of the Valley of Fairies -> Sibiu

Our 1st stop was at the Vidraru Lake, which is an artificial lake created in 1965 by the construction of the Vidraru Dam on the Argeș River. It lies in the shadow of the Făgăraș Mountains. A village lies submerged at the bottom of this lake.

Vidraru Lake was created for electricity production. It has 465 million cubic metres of water, with a length of 10.3 km and a width of 2.2 km, thus accumulating a total area of 870 hectares and maximum depth of 155 metres. 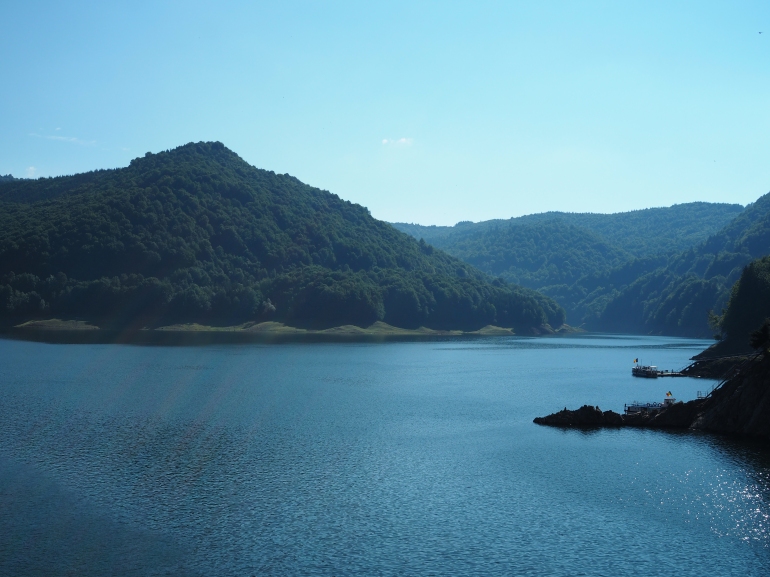 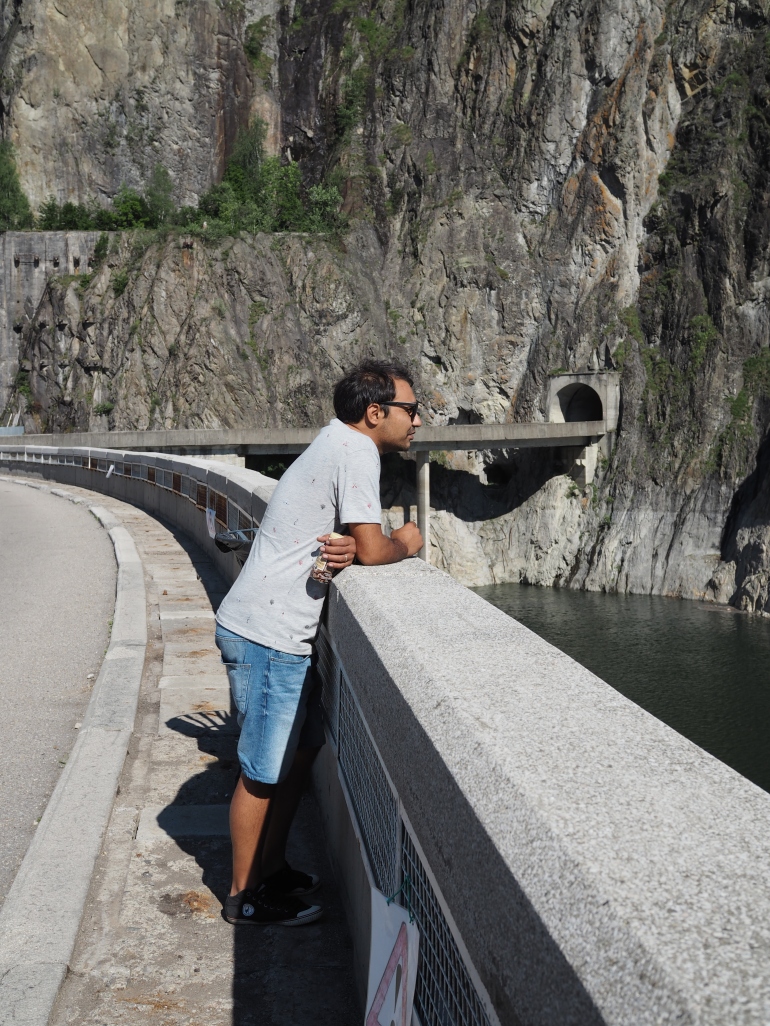 Now let’s continue with Transfăgărășan Road which is the world’s best road trip according to Top Gear yaaay!

The Transfăgărășan or DN7C is a paved mountain road crossing the southern section of the Carpathian Mountains of Romania. It has national-road ranking and is the second-highest paved road in the country after the Transalpina road. It starts near the village of Bascov and stretches 90 kilometres (56 mi) to the crossroad between the DN1 and Sibiu and between the highest peaks in the country, Moldoveanu and Negoiu. The road, built in the early 1970s as a strategic military route, connects the historic regions of Transylvania and Wallachia.

I will just show you some photos, but I have to admit, pictures really don’t do any justice to this place and you definitely need to see it in person! 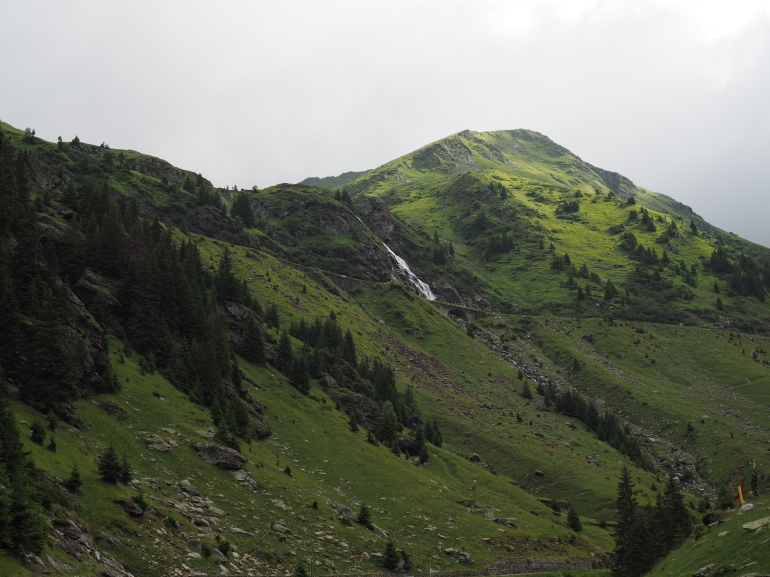 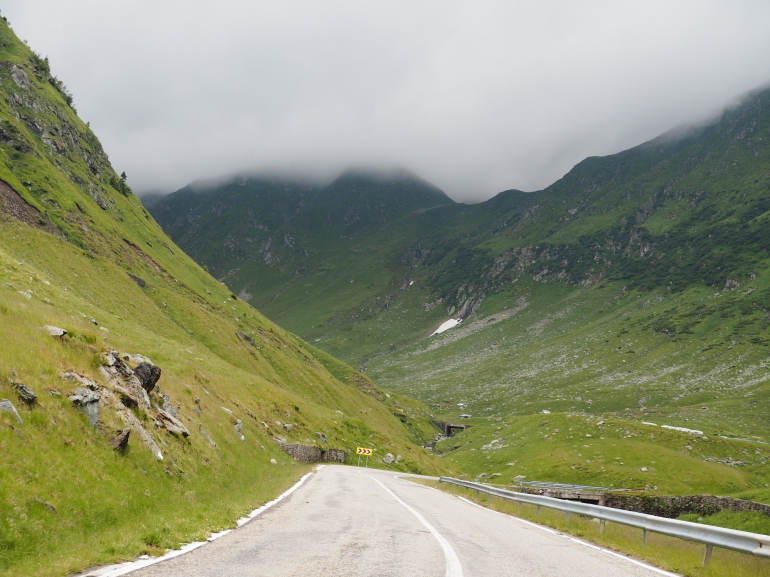 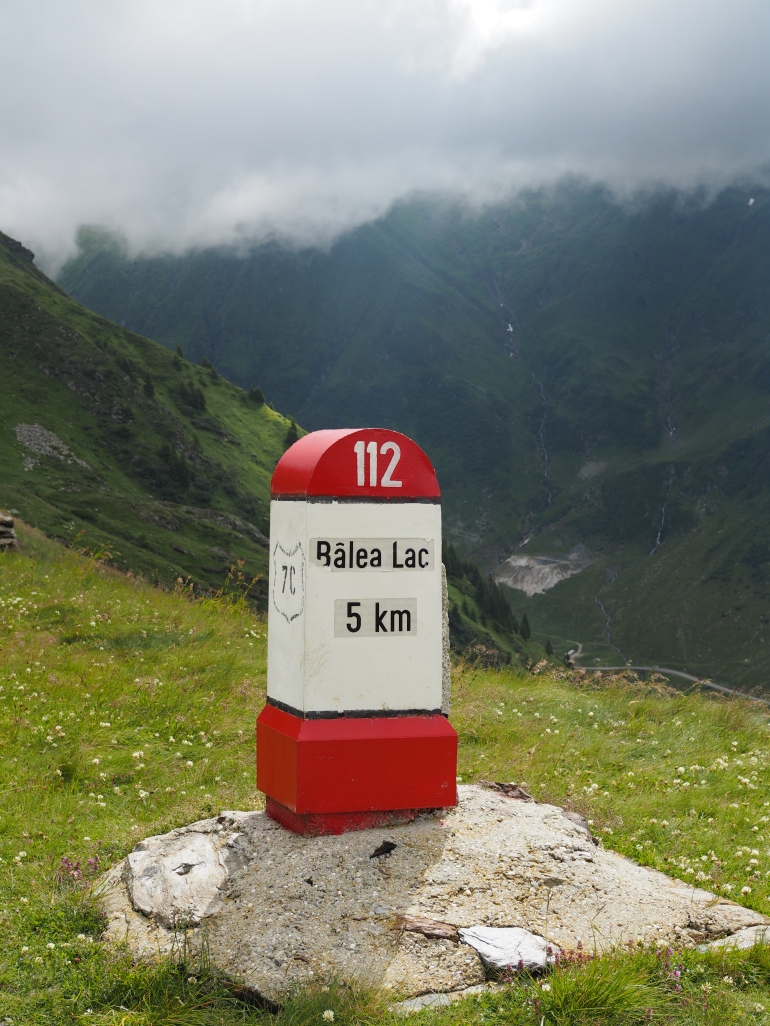 Next stop: Bâlea Lake which is a glacier lake situated at 2,034 m of altitude in the Făgăraș Mountains as well. There are two chalets opened all the year round, a meteorological station and a mountain rescue station. It is accessible by car on the Transfăgărășan road during the summer, and the rest of the year by a cable car from the “Bâlea Cascadă” chalet. Also, in 2006, the first ice hotel in Eastern Europe was built in the vicinity of the lake.

Two years ago, we came to Bâlea Lake and unfortunately, it was all foggy and didn’t manage to see anything up there… such a bummer;(

Therefore, this time I praised to all of the existent Gods to let it be sunny that day because we wanted so so so much to see with our own eyes all those picturesque views.

But guess what? It was foggy this time too. Just couldn’t believe it! It was happening again…

Told my father and husband that I wasn’t going to leave that place until that fog would go away. They just said this wasn’t going to happen but right after we ate some “bulz” (Romanian dish composed by roasting polenta and cheese + sour cream) the sun made it through the fog and everything looked as spectacular as I imagined. 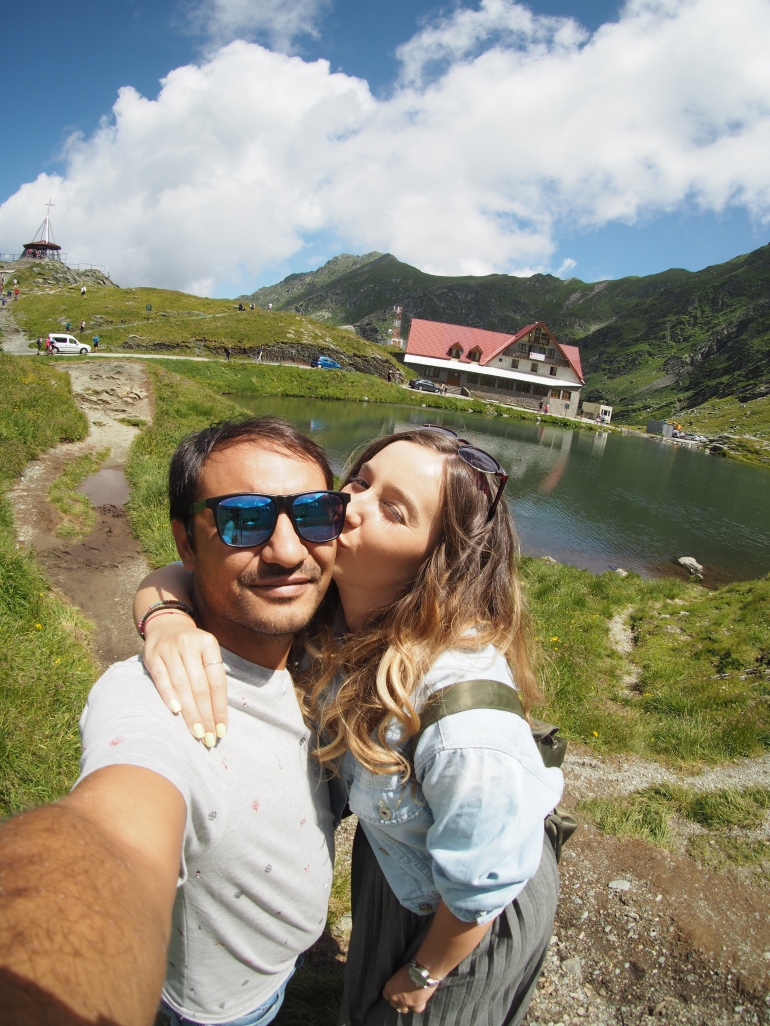 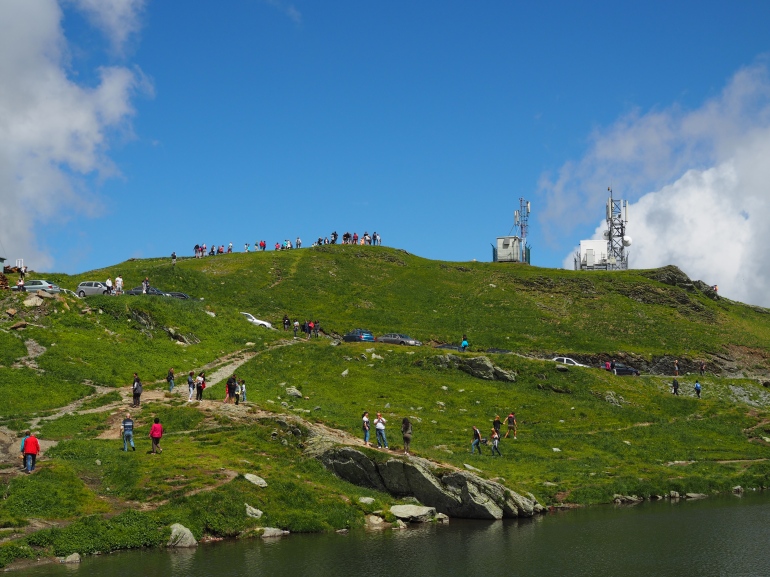 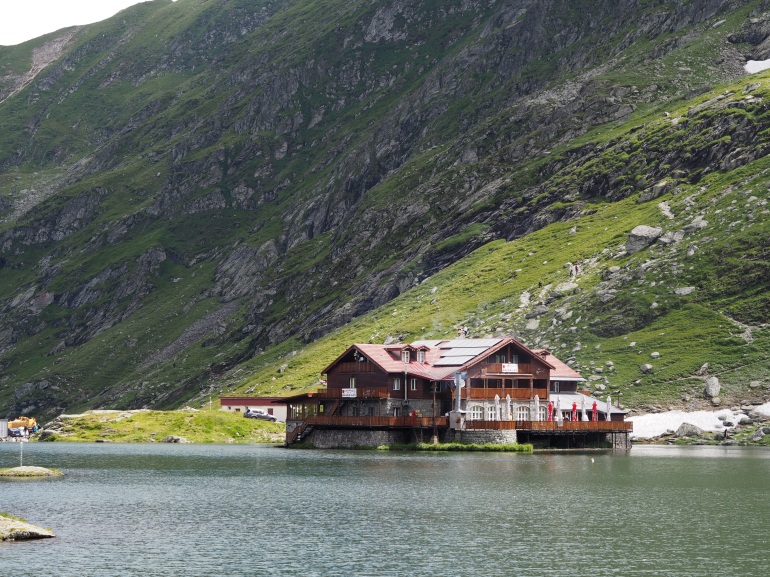 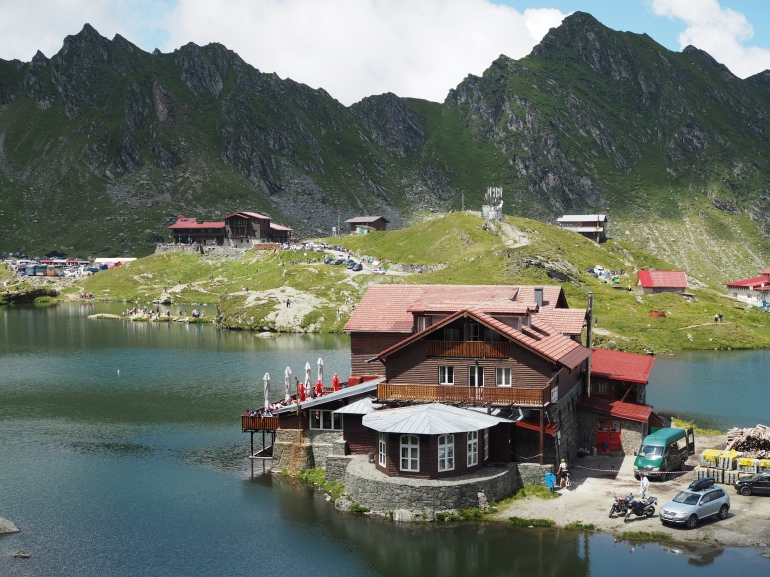 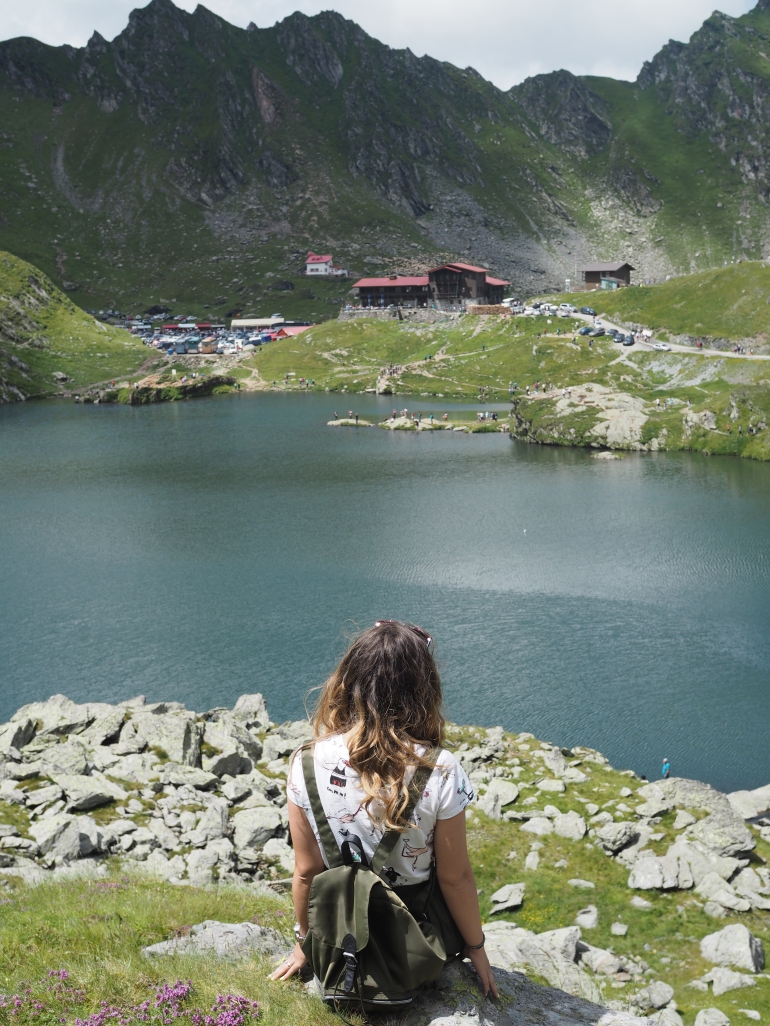 Therefore, mission accomplished yuhuuu! I managed to see this magical place without any foggy situation being involved haha. After this, we continued our road on Transfăgărășan so let me show you some more beautiful pictures I took there ^^ 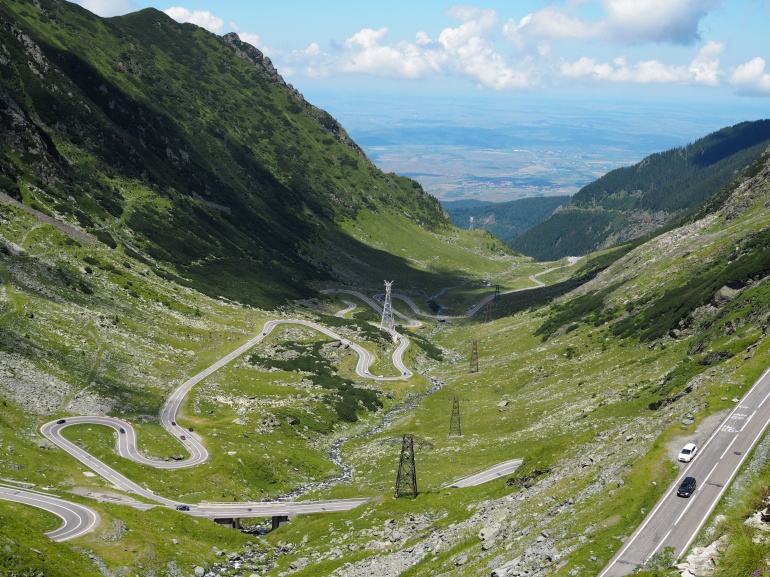 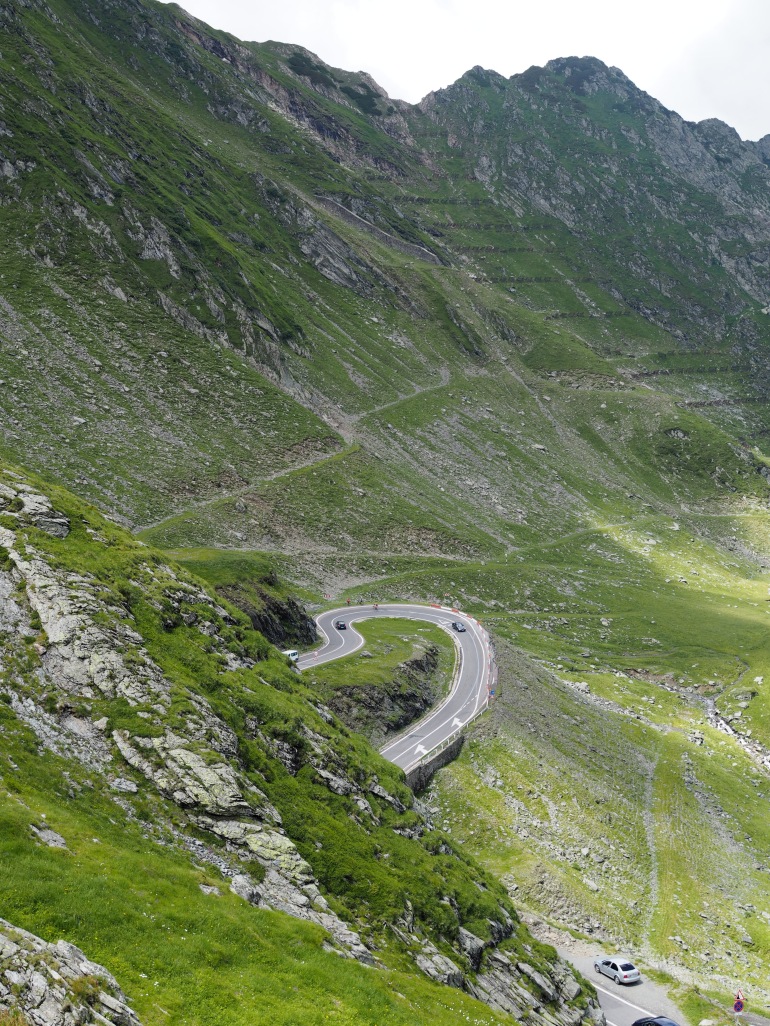 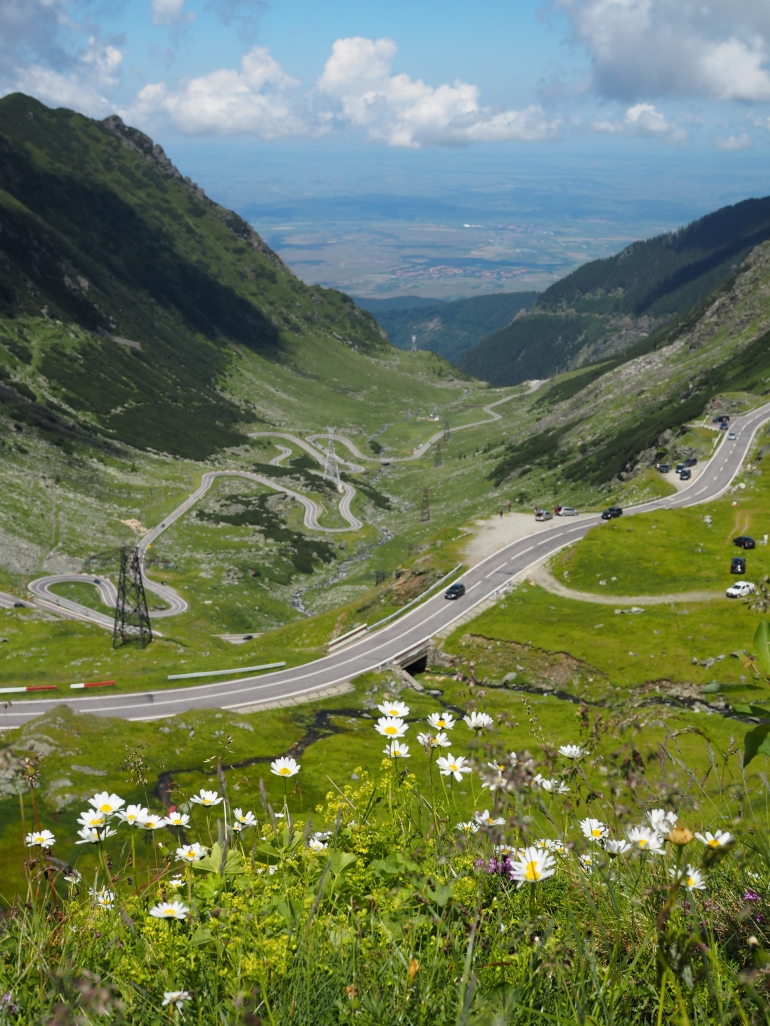 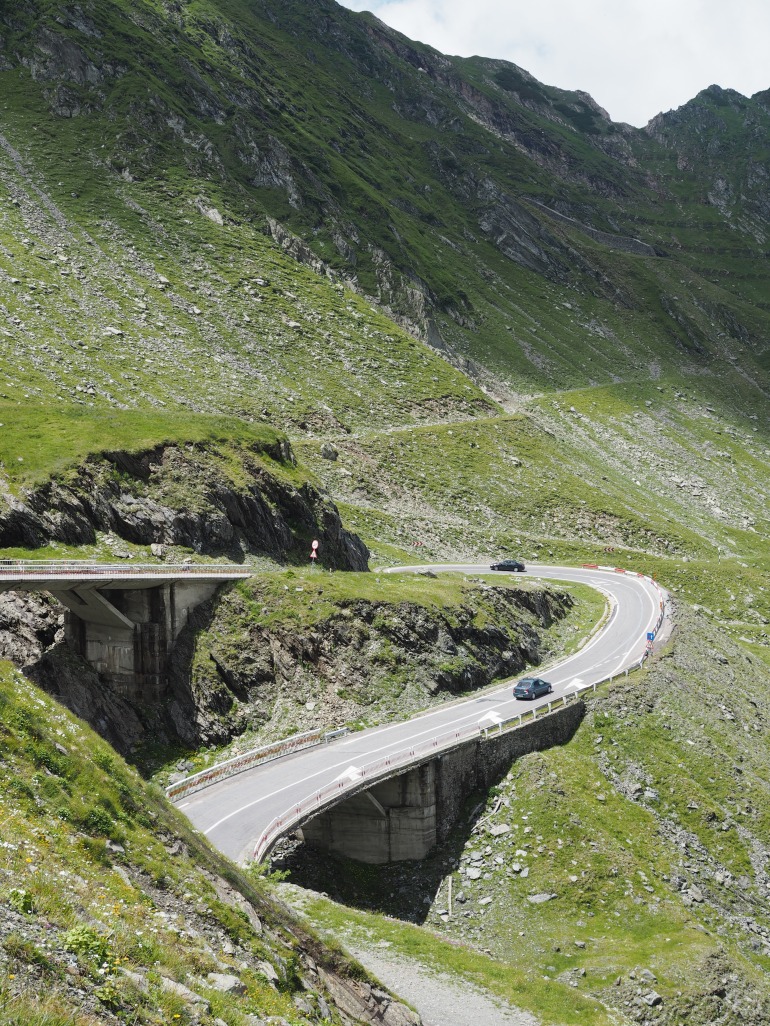 Next stop: Clay Castle of the Valley of Fairies which is made of 100% organic clay, straw and sand, with all wooden pillars and not a lick of modern paint or varnish.

A Romanian couple have spent two years building an eco-friendly fairytale castle in the mountains of Transylvania, using only natural materials. The building looks like something out of the Hobbit rather than a castle in the conventional sense, and the owners hope eventually to open it as a hotel, given its location in the spectacular Carpathian Mountains and proximity to the famous Transfăgărășan road and medieval Sibiu.

I am really looking forward for this beautiful place to turn into a hotel because I would really like to spend a weekend here. What do you think? Isn’t it just wonderful?

And after all these stops and walking, we finally reached Sibiu. However, we had to turn back home the same day, so we didn’t have much time to wander through the city ;(

Sibiu is a city with a population of 147,245 and its history goes all the way back to the 12th century. It is one of the most important cultural centres of Romania and was designated the European Capital of Culture for the year 2007, along with the city of Luxembourg. Formerly the centre of the Transylvanian Saxons, the old city of Sibiu was ranked as “Europe’s 8th-most idyllic place to live” by Forbes in 2008.

Sibiu might not be the largest town in Romania, but it packs a punch when it comes to sightseeing, charming medieval buildings and history. Most of the main sites are located in the historical centre, which includes the Big Square, Huet Square, the Small Square, Liar’s Bridge and Goldsmiths’ Square.

Being short of time, we went straight to the old part of the city and rapidly took some photos. Enjoy! 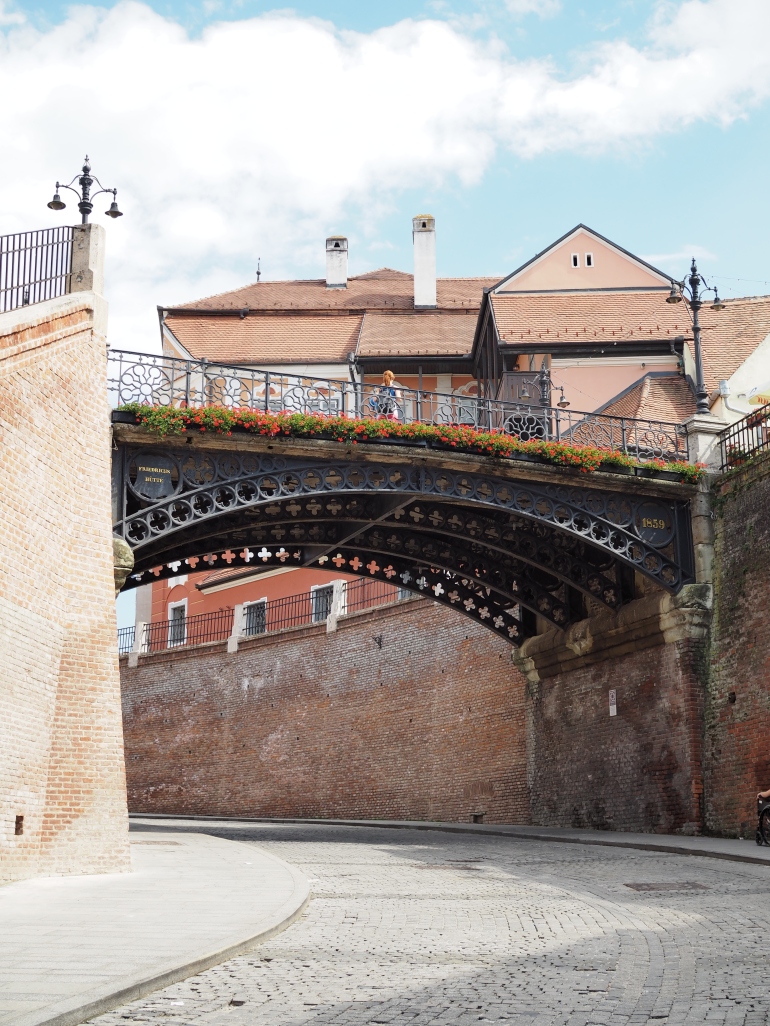 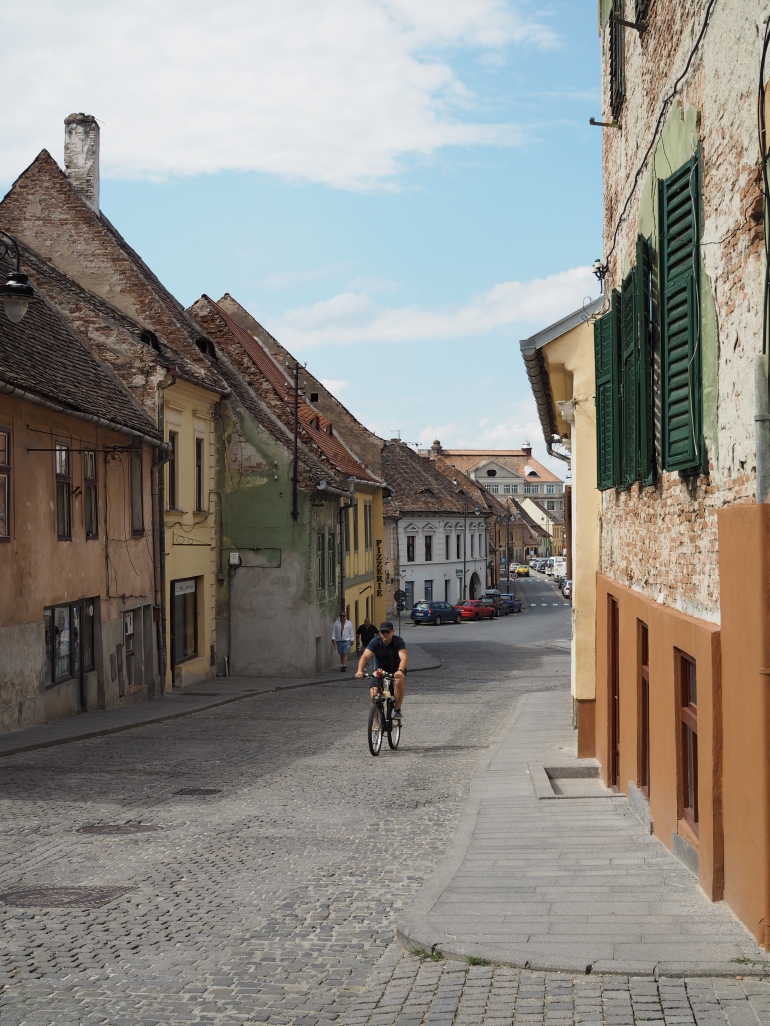 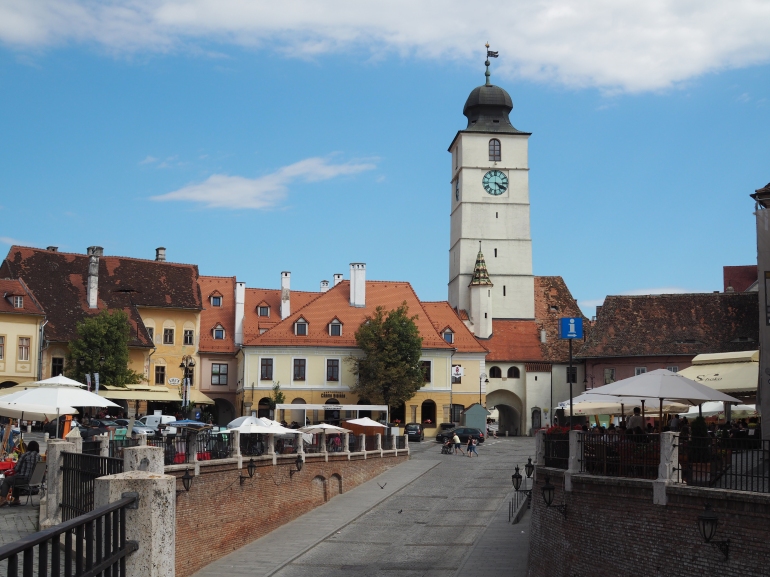 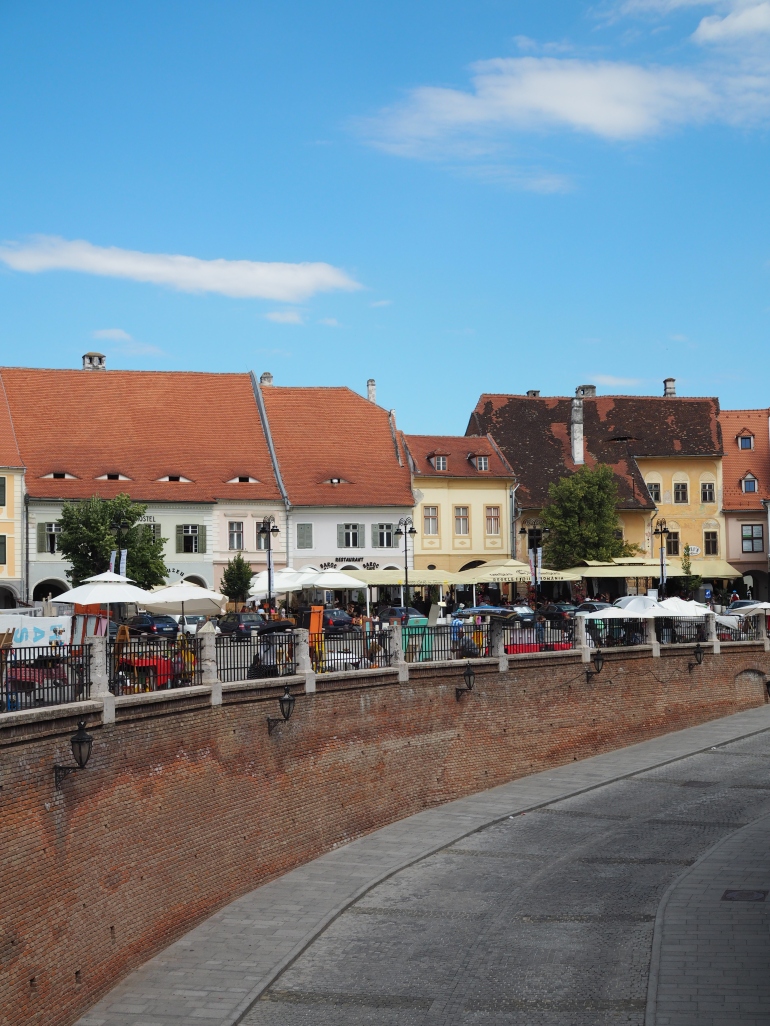 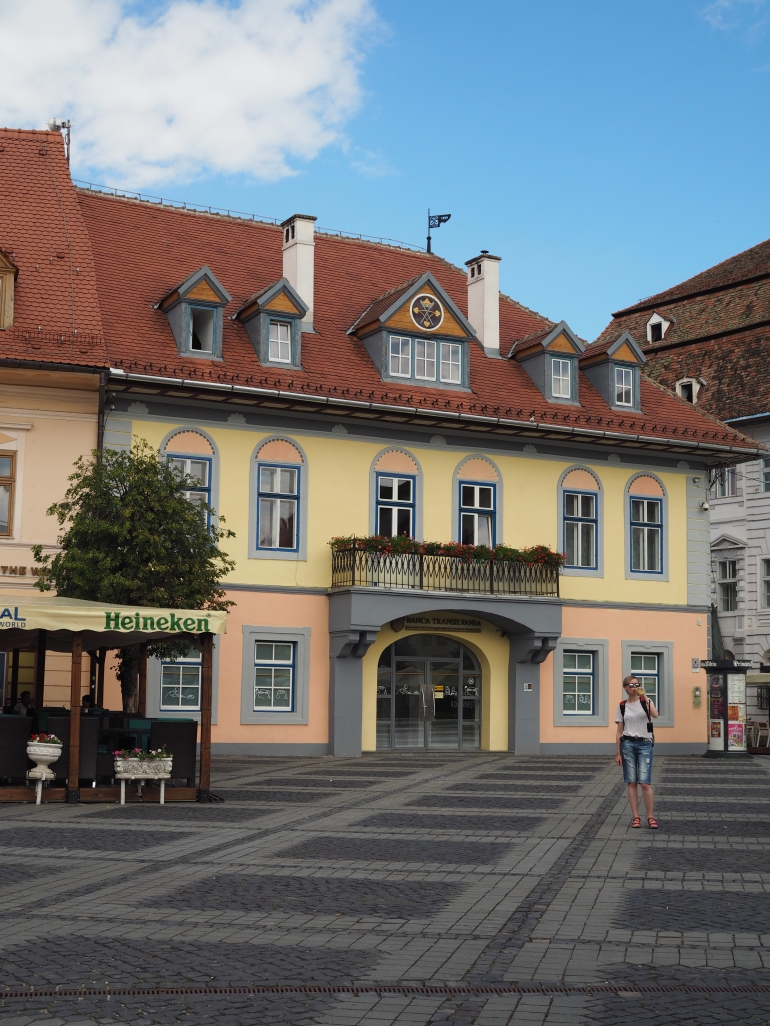 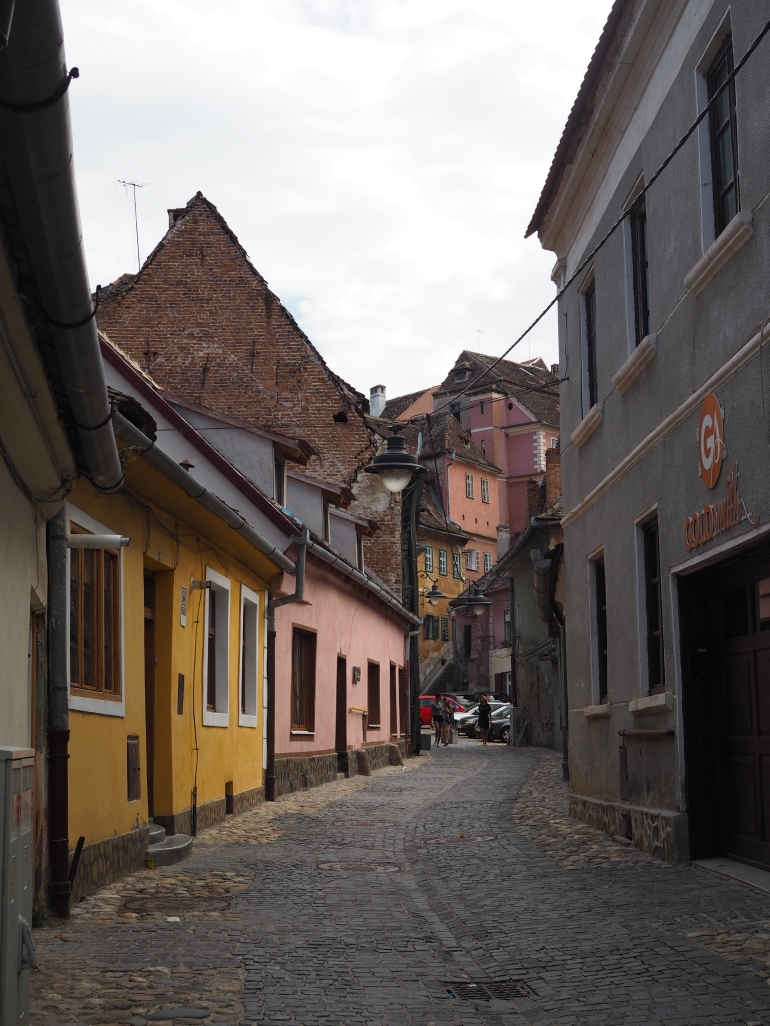 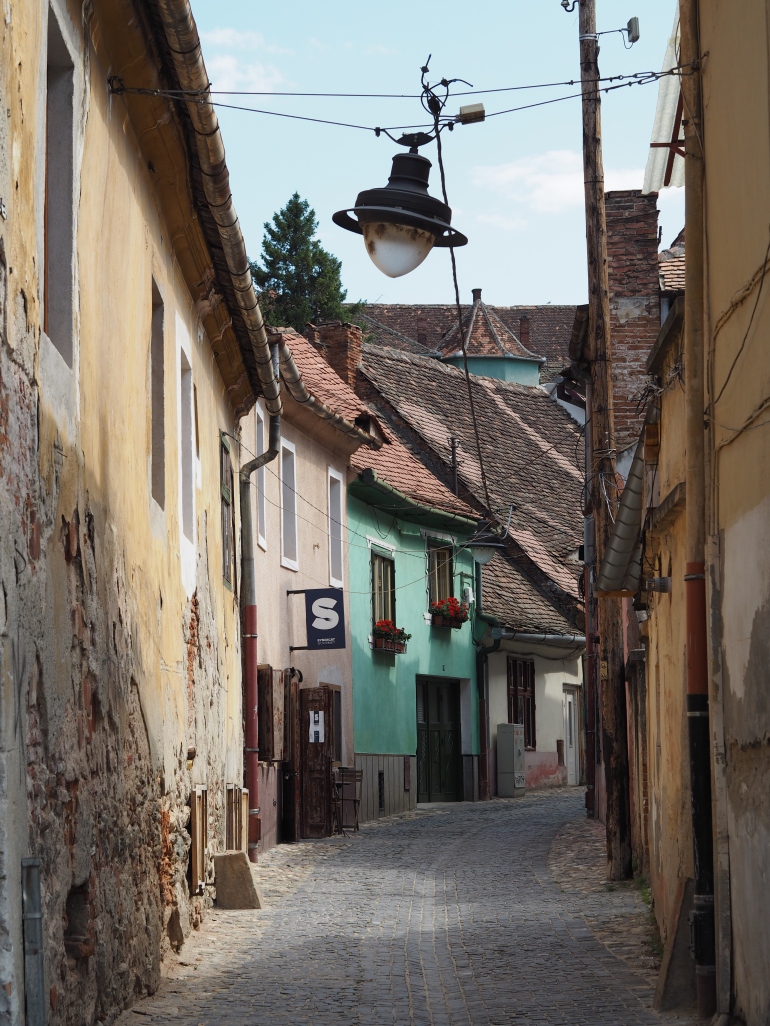 So sorry that I couldn’t show you more about Sibiu but I promise *cross my heart and hope to die stick a needle in my eye* that I will come and stay in Sibiu for a full weekend and visit it properly because the city really deserves a whole blog post dedicated entirely for it.

After that, we went straight home… well, almost straight… because we stopped again to have something to eat, being a little hungry.

We ate some “mititei” or “mici”, both Romanian words meaning “small ones”. This is a traditional Romanian dish of grilled ground meat rolls made from a mixture of beef, lamb and pork with spices, such as garlic, black pepper, thyme, coriander, anise, savory and sometimes a touch of paprika. Sodium bicarbonate and broth or water are also added to the mixture. It is often served with french fries, mustard and “murături” (Romanian pickles).

Sooooo if you are visiting Romania for some reason, you should try our traditional food as well!

View all posts by travelmoreworryless

8 thoughts on “Trip to Sibiu – my favorite Romanian city” 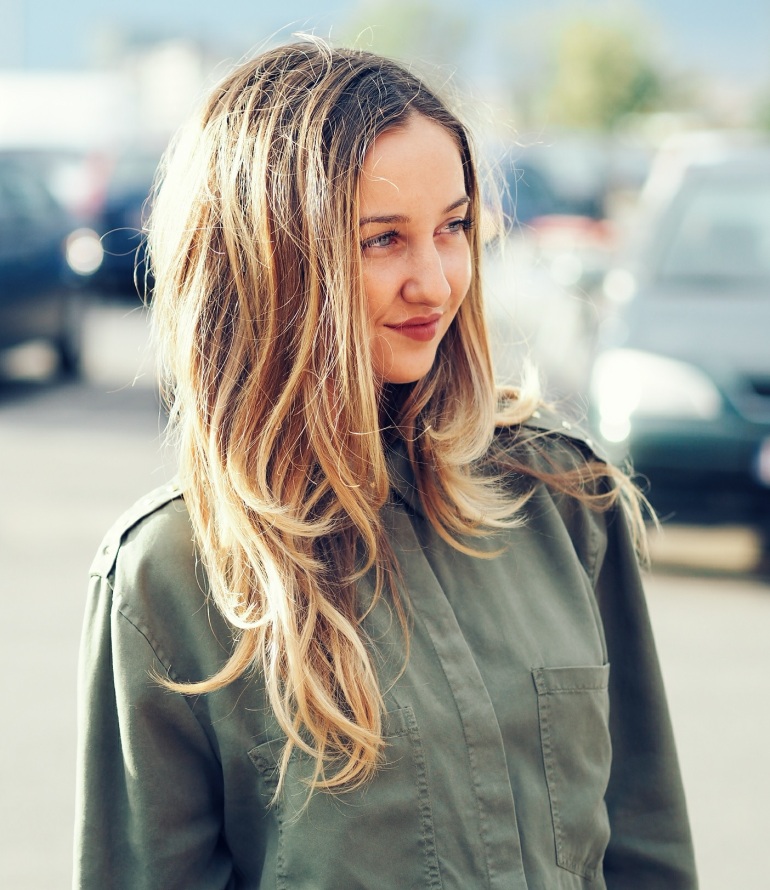